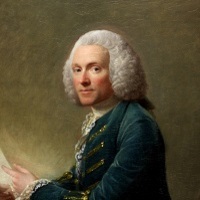 Formed at the very inception of the notion of the modern museum, and established as a public institution to be used a source of knowledge and instruction, the Hunterian collection, encompassing outstanding paintings and works on paper, coins and medals, palaeontology and mineralogy, anatomical and zoological specimens, first-contact ethnographic material, shells, insects, mediaeval manuscripts and incunabula, located within the intellectual structure of the 10,000 or so volumes of major ‘working’ libraries of eighteenth-century London, remains a uniquely coherent Enlightenment survival.

2018 marks the tercentenary of the birth of the Scottish-born obstetrician, anatomist and collector, Dr William Hunter (1718 – 1783). As Physician Extraordinary to Queen Charlotte from 1761, Hunter was responsible for the successful delivery of the children of George III. Among numerous professional accomplishments he was elected as a Fellow of the Royal Society in 1767 and was appointed as the first Professor of Anatomy at the Royal Academy in 1768.

If teaching anatomy lay at the heart of Hunter’s activities, particularly at his purpose-built anatomy theatre in Windmill Street, generating and propagating knowledge, as a wider public good, found an ever-developing place in his energies. From the mid-1760s onwards, after failing to obtain government support for a public school of anatomy in London, Hunter determined that his own legacy would be an institution funded from his own pocket in which his ever-growing collections would provide a focus for learning and research. By the 1780s the idea of bequeathing a museum to the University of Glasgow became the dominant feature of his will. Among the key individuals responsible for Hunter’s education at the University of Glasgow was Francis Hutcheson. Hutcheson’s pupils included some of the key figures of the Scottish Enlightenment, perhaps most notably, Adam Smith.

By the time that The Hunterian, with its astonishing encyclopaedic Enlightenment collections, opened its doors to the public in 1807, Glasgow’s own memory of its early Enlightenment heyday was fading rapidly. Similarly, while Hunter’s determination that his collection should be preserved as a single encyclopaedic whole, offering a vision of knowledge approached through material culture, was maintained in the ground-breaking museum designed for the purpose, the increasingly divergent nature of research disciplines within the early nineteenth-century academy ran counter to the approach taken by Hunter: while the collections survived, Hunter’s intentions for a collection which was to be situated at the heart of an institution’s teaching and research activities was to become increasingly obscured over the course of some two hundred years.

A number of research and exhibition programmes undertaken chiefly in Glasgow over the last decade have begun a process of recovering the truly unique place of Hunter and his collections in our understanding of the Enlightenment in Scotland and beyond. The 2018 tercentenary will be the first opportunity to reassess Hunter and his collections on an international basis and to locate them coherently in their broader European and North American context. To develop the research themes and an understanding of current scholarship in this field, two international research workshops were held in Glasgow 2014, funded by the Royal Society of Edinburgh. A further programme is currently in preparation.

A major Hunter Tercentenary exhibition, chiefly formed from Hunter’s own collections, is currently being organized in collaboration with the Yale Center for British Art. The exhibition will be shown at The Hunterian in the autumn of 2018 and will then travel to Yale in early 2019. The encyclopaedic extent of Hunter’s Enlightenment collecting interests will be presented in objects of truly outstanding quality and uniquely rich variety. From great paintings by Rembrandt, Chardin and Stubbs to ‘first contact’ material from the Cook Pacific voyages, anatomical and natural history specimens, one of the finest coin cabinets ever assembled, a major mediaeval manuscript collection and a library encompassing publications by friends and contemporaries including Adam Smith, David Hume and Jean Jacques Rousseau, together with treasures from the Spain, the Middle East and China, the exhibition will seek to draw together the intellectual threads of a world in which notions of expertise, taxonomy, visibility and preservation were only newly being applied to knowledge formed around objects and the institutions designed to house them and make them accessible. The exhibition will be accompanied by a major Yale University Press publication edited by Mungo Campbell and containing a series of essays by key scholars in the field, both established and emerging. The publication will seek to re-shape understanding of Hunter’s achievement and offer a ground-breaking re-examination of the contexts in which he formed his collections and the unique position which they occupy in the history of the modern museum.