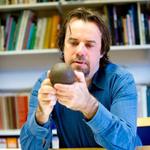 Director Centre for Battlefield Archaeology, Senior Lecturer History/Archaeology
Tony.Pollard@glasgow.ac.uk
www.gla.ac.uk/schools/humanities/staff/tonypollard/
Director of Centre for Battlefield Archaeology, convenor of MLitt in Conflict Archaeology and Heritage. Co-editor of The Journal of Conflict Archaeology. Numerous publications for academic and popular audiences – books and articles (incl, a novel). Field Director of Waterloo Uncovered – international project subjecting the battlefield to archaeological investigation. Carried out conflict related fieldwork projects across the world, including discovery and evaluation of Great War mass graves at Fromelles, France on behalf of Australian Government and survey of Culloden battlefield for National Trust for Scotland. Director of Glasgow University’s Great War Project and a senior partner in Digging In – reconstruction of Great War trenches in Pollok Park as an educational resource. Regularly appears in television documentaries.

I have increasingly become interested in the mental impact on combatants during armed conflicts. This is reflected in several of the projects I am currently engaged in or have in development: Waterloo Uncovered: Archaeological investigation of Waterloo battlefield which engages wounded and traumatised veterans and serving military personnel in the practice of archaeology (which has been proven to have a therapeutic benefit). Looking towards providing online courses for this group also. Digging In: Recreation of Great War trenches in Pollok Park, an educational facility which will serve to engage school children and others in activities related to activities on the frontline and the home front 1914-18. Medical issues and shell shock will be included in the programmes offered. Director of Glasgow University’s Great War Project – this is now in its second year and is a thorough study of impact of the war on the university, including the considerable contribution made by medics. The above project has established close links with Erskine, which provided support and artificial limbs for service personnel from 1916 onwards. It was founded by Sir William Macewan who was Professor of Survey at University of Glasgow. Currently applying for small grant from Wellcome Trust to establish research network of scholars (incl. historians and phycologists) interested in Falklands War of 1982. Currently informal partnership with clinical experts in PTSD at Centre for veterans and Families at Anglia Ruskin University (mainly prof. Jamie Hacker-Jones). Longer term plan is to work with veterans in recording remains of war on Falkland Islands and in doing so explore issues of memory, place and combat stress. Have made two reconnaissance visits to islands, most recently this April with a veteran returning for first time since 1982. As a spin off from both the Waterloo and University Great War Projects we have carried out a preliminary assessment of the number of Glasgow University trained medics who were at the Battle of Waterloo. We have come up with around 15 names and the plan is to turn this into a more substantial project on the history of military medicine.