The Genetics of Prenatal Diagnosis and Its Social Impact, c1950-c1990: the case of Malcolm Ferguson-Smith 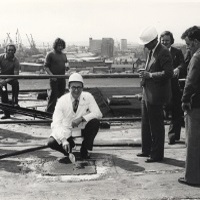 The 1960s was a decade of major social and cultural change, which was characterised by a decline in religious adherence and advances in many scientific disciplines. The field of genetics was amongst those progressing rapidly, with major technical advances being made. Whilst it had long been recognised that many medical conditions were inherited, it was only in the late 1950s that it became possible to identify specific genetic conditions during pregnancy using prenatal diagnostic testing. In the West of Scotland a key figure involved in developing prenatal testing was Malcolm Ferguson-Smith, who is widely regarded as one of the most eminent British geneticists of recent decades. He played a key role in developing prenatal tests for Down’s syndrome and spina bifida and was also responsible for the establishment of the Duncan Guthrie Institute in Glasgow in 1980, one of the first specialised diagnostic and genetic counselling services for patients in the UK.

Ferguson-Smith’s research work often placed him in direct conflict with religious organisations, as the nature of research into the detection of genetic abnormality, enabling elective termination of affected pregnancies, raised ethical issues and concerns which directly conflicted with the views of a number of religious groups and commentators. This project will investigate Ferguson-Smith’s role in the development of prenatal diagnostic testing, and will place his findings in the relevant context of the complex religious-ethical conflicts that arose from his research and its implications.