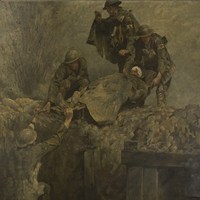 'Medical Concerns and Military Thinking' primarily seeks to examine which direct and indirect influence medical considerations can have upon military strategies and tactics. The project aims at analysing how, when, and why medical innovations and reflections affected military planning during the First World War and in how far these plans could be implemented into wartime reality. It is planned to compare the situation and conditions in the British and German forces. A juxtaposition should allow examining the similarities and differences in the approach of two major military powers that were facing each other during the conflict and provide information in how far cultural and organisational differences might have influenced these proceedings.

World War I: stretcher bearers of the Royal Army Medical Corps (RAMC) lifting a wounded man out of a trench. Painting by Gilbert Rogers.