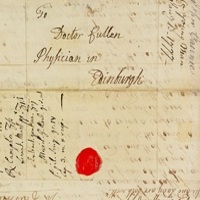 This project, a collaboration between the School of Critical Studies at the University of Glasgow and the Royal College of Physicians of Edinburgh (RCPE), was funded by a major AHRC research grant award. We created a publicly accessible, online scholarly edition of one of the most important archives of eighteenth-century medical "consultation letters".

William Cullen began his career as a medical lecturer and pioneer teacher of Chemistry at Glasgow University. He rose to international fame as the leading figure in Edinburgh University medical school and served as president of the RCPE. He was appointed the King's Physician in Scotland and became the most influential medical lecturer of his generation. Alongside his close associates David Hume and Adam Smith, Cullen played an important role in the Scottish Enlightenment.

Cullen's private consultations survive as a remarkable archive of several thousand letters. These include requests for advice from patients or close family members and referrals from attendant physicians and surgeons. Cullen retained his responses, initially as written transcripts then, from 1781, as duplicates made on a "mechanical copier" invented by James Watt. These exchanges with correspondents throughout Britain and abroad include some sustained autobiographical "illness narratives" and intra-physician exchanges. They provide a rich resource for gaining an historical insight into the experience of illness and the effort to cure disease.

Our edition has innovative search facilities with supportive editorial apparatus and will be of value to academics, practitioners, students and the general public interested in the history of: William Cullen and eighteenth-century medical practices; patients' stories, illness narratives and medical language; letter-writing and postal communications; food, drink, exercise and travel; social relations and family history.