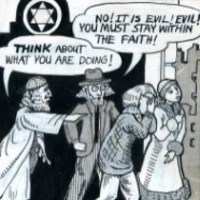 How do contemporary comic artists reference biblical literature and iconography in their autobiographies, what is the intention of these references and how do they work within the context of traumatic narratives? I argue there is a feminist reparative aspect in these women’s stories as they write and draw themselves into biblical texts and images, transforming texts and images that have previously ignored female experience. I also argue there is also the promise of redemption in religious imagery, that can support the artist in their moment of crisis. “If you do believe in the Biblical Story, you do, in a sense, believe in a grand narrative of history, so that in everything even the most disastrous catastrophes, will ultimately make sense to you- maybe not now, but at some point of illumination in the future. This now longer seems to be feasible to many…” (LaCapra )

I analyse images of mental illness in Bobby Baker's Diary Drawings with reference to medieval Christian iconography. Miriam Katin's Holocaust memoir, "We Are On Our Own" is an example of the return of childhood war and sexual trauma accessed through the borrowed structure and narrative of biblical texts. Sharon Rudahl 's "The Star Sapphire", is a coming of age narrative that re-appropriates Biblical iconography to speak where female biblical characters have been silenced.

I also present my own work as an artist, including my drawings and films, and my autobiographical graphic novel The Book of Sarah to be published by Myriad Editions in 2017. In my artwork I rewrite the Bible to make me and my life, as an ordinary woman, take centre stage, in protest to my Biblical namesake, the Matriarch Sarah, who was silenced and marginalised. I conclude my doctorate with a discussion of “Graphic Details: Confessional Comics by Jewish Women”, “Graphic Details” has reconfigured the male focus of exhibitions of Jews and Comics, and brings Jewish women creators into the spotlight. This is another way to move from the the silencing of Jewish women’s voices and enable the celebration of their work and voices.