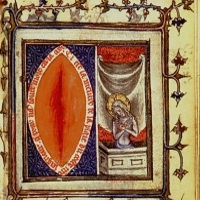 This thesis will examine period medical sources and visual cultures relevant to understandings and treatments of wounds to explain how these might have informed artistic representations, devotional practices, and dramatic expressions of the wounds of Christ during the later middle ages. Interpretation of Christ’s wounds in the late medieval period can be found in theology, art, mystical writings and literature, but it is not apparent how a medieval audience would have understood these representations of the wounds of Christ. It is thus essential to take an interdisciplinary and queer approach in order to recover the polysemous meanings of the wound for this audience. By utilising such perspectives which reject hetero-normative assessments of Christ’s wounds as merely religious in their symbolism, and which foregrounds sexuality as a key lens for interpretation, new insights can be offered on both the medieval construction of Christ’s wounds in image, text and performance, but also how such imagery influences the extreme body art of certain queer artists in Western Modernity. My interdisciplinary and cross-period analysis will illuminate the significance of Christ’s wounds in both medieval sources and contemporary queer art, and as such, is of interest to scholars of the medieval and modern period, to creative artists working on queer performance, and to modern audiences of both periods of art.