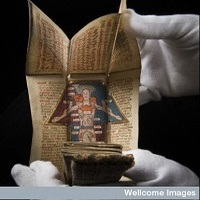 My PhD project examines attitudes towards authority in early English medical texts and how different ideologies, namely scholasticism and empiricism, affected the way medical writers viewed their own authority and the authority of others. The material for my study comes from the 2.5million-word Corpus of Early English Medical Writing, which currently covers the time period 1375-1700. Within this period European science underwent a fundamental ideological shift, which also affected the language of scientific argumentation.

In the Late Middle Ages medical texts were built on and contributed to the learned tradition of scholastic medicine which relied primarily on the authority of ancient Greek and Arabic writers. The scholastic method of inquiry consisted of comparing and reconciling the views of different authorities, and therefore the scholastic style of argumentation relied primarily on frequent references to authoritative sources. The early modern period, on the other hand, saw the gradual rise of empirical science and with it emerged a new style of argumentation which emphasised observation and subjective judgement over the writings of previous authorities. By mapping these differences in argumentation styles I am examining how ideological changes affected scientific discourse.

The aim of my study is to expand our understanding of the transmission of authoritative knowledge in early English scientific writing. What makes medical texts particularly interesting from this perspective is that medicine, as a high-risk, high-gain activity, tends to rely heavily on authoritative information – usually only practices endorsed by authority have been considered appropriate for application on human beings.