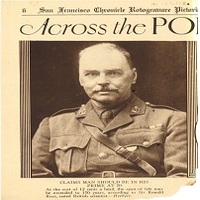 This project focuses on the writings and reception of Sir Ronald Ross (1857-1932), physician, malariologist, writer and polymath. By exploring The Ross Collection archive at the Royal College of Physicians and Surgeons of Glasgow, and conceptualising findings in relation to recent Medical Humanities scholarship on Victorian physician-writers and colonial and post-colonial literature, this project creates the first critique of Ross’s literature, examining the relationship between his literary and medical careers and placing it within the wider context of criticism on colonial medicine.

Image Credit: A press clipping from the San Francisco Chronicle, 29 December 1929 (The Royal College of Physicians and Surgeons of Glasgow) (Image has been resized)